Running an early-stage, seasonal web startup at a glance

One of the most successful products I’ve created to date is Sisu (madewithsisu.com). It’s also one of the only products that I’ve built with a revenue stream from Day 1.

To explain; Sisu enables users to connect their exercise data from Strava or Runkeeper and design a print (poster) visualising what they have achieved. Our design tool enables users to pick a start and finish date from which to include activities. Other options enable the user to choose the colour of their print and the measurement system (Metric or Imperial) used. Users can also customise the athlete name and title on the design too.

Users can share their creations digitally or buy a physical version of their print. Print’s are A3 (12”x16”) in size and printed on high quality 300gsm paper. The price of a Sisu print is £30 (approx $45). 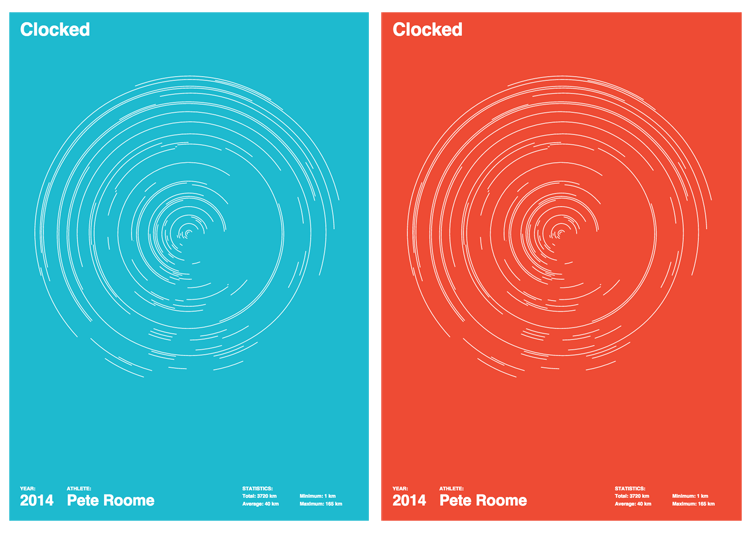 Since it’s inception, Sisu has been featured on a number of websites (Product Hunt) and blogs (Scarlet Fire). It has also been shared on social media by some well known and influential people (Khoi Vinh) too.

This app takes your exercise data and turns it into "art." http://t.co/vatBIn5ajq pic.twitter.com/WJzqAoxi8N

Each time Sisu is featured we see the usual spike in traffic and signups from a small percentage of those visitors. This is followed by the predictable drop-off of traffic. Seasoned Internet entrepreneurs know all to well that this kind of traffic is difficult to draw conclusions from. Often the target audience of the website that has featured your product, isn’t your intended audience. The traffic will therefore throw your analytics into disarray. Bounce rates escalate and you quickly acquire early-adopters who will sign up to anything and everything, often never to be seen again. However, this is another discussion entirely.

To better understand Sisu’s current position, here are a few screenshots that will give you a better picture of our traffic. Be aware of the scale changes on the Sessions graph each month.

How is Sisu seasonal? When is it seasonal?

Until last week, Sisu only had one product for users to design, share and/or purchase: The Multi-Route. Despite the ability to choose a start and finish date, the print design has a natural tendency to lend itself towards an end of year purchase. We know this firstly from user feedback and secondly from the data we’ve collected in the last couple of months.

We’ve spoken to a number of Sisu’s users who reached out and told us that they love the product and couldn’t wait to purchase a print…at the end of the year!

The data we’ve collected since December 31st and throughout January has proved our assumptions. We sold nearly as many prints in January as we had done the previous 9 months. It’s worth noting that a reasonable proportion of the prints sold before 31st December 2014 were historical representations of users data from 2013 and 2012 for example. They were not 2014 related.

Here is some data for comparison to enhance the picture:

A quick synopsis shows that between December and January we received nearly 2x as many sessions as we had done in the previous 7 months. Our user based grew 4x too. Our (slightly) higher returning visitor % contributes towards proving our hypothesis: users would wait and return at the end of the year to make a purchase.

What effect does this have upon running the product?

The seasonality of the product means we need to think about how we can better stabilise our sales throughout the year. Some thought has already gone into this and it has affected our product roadmap - we have much more focus.

In the last few weeks we have worked hard to improve our customer feedback loop. Using Intercom.io we’ve been able to easily target past customers to ask: “what would encourage you back to Sisu on a more regular basis?”. It’s also enabled us to target “active users” to ask “what other data would you like to see on a Sisu print?”. By asking these questions we hope to achieve two goals…

Our highest priority is to improve the conversion rate of users we turn into paying customers. This is done by acquiring a better understanding of what our users would like to see from a print design.

Secondly, we’d hope to introduce products that a far less seasonal. Through understanding what is important to our users in terms of the content of a print, we can produce better designs in the first place. Once we understand what data it is our users like to “show off”, we can repeat the recipe to produce profitable designs over and over. That’s the theory anyway.

Both of the aforementioned goals contribute towards our high-level target of product market fit. Rule #1 of Product Management, right?!

Our short to medium term goal is retention. In the short term, we’ll improve this by offering more (quantity and quality) designs in the store. However, we need to work out what will cause our users to return to our website monthly, weekly or even daily. Additional visualisation tools and automatic posting of a users achievements to social media are two ideas we’re exploring.

The third focus is maintaining and even improving the viralness of our product. We’ve experienced huge success on Twitter using Twitter cards. When a user creates a print on Sisu and shares it via Twitter, an image of their design is attached with the tweet and shows up in the users stream.

Depending on who shares their print, we’ve seen on occasions 10+ user signups off of the back of a single tweet. By expanding the number of designs we have on offer we hope to compound this number as more people choose to share their creations.

My rides in 2014 (on the correct Twitter accoun this time...): https://t.co/jbomyXIl3s via @madewithsisu

Reddit has also been a valuable channel for us. We’ve become more regular at posting examples of our own creations to related, niche sub-reddits to attract attention to our product. It’s a channel we’ll be exploring further, especially as we launch more and more designs.

The lesson learnt from our data is that we’ve created a seasonal product. We want to generate a more steady revenue stream so we need to address the problem. To do this we’ve manuevered ourselves closer to our users using Intercom. This will guarentee that we know what our users want from our product. Directly related to the product itself, we’re drafting print designs that are far less seasonal by nature.